All Collections
Best practices and strategies
How to test different ads

How to test different ads

Written by Hannah Lindstadt
Updated over a week ago

To test different ads you need to make sure your audiences and ads are set up in the right way, to ensure your campaigns use your budget efficiently.

It is important to understand how Facebook optimizes campaigns in and between audiences and to always try to use as few audiences as possible.

How to test ad creatives in Single or Carousel ads:

If you want to test new creatives and use single or carousel ads, the best way to do this is to make the ads, one by one, within the same audience (a detailed explanation is provided in the last section of this article "the basics of optimization").

How to test ad creatives in Dynamic ads

If you want to test ads in a dynamic campaign, you are able to upload several different images and texts in the same audience, but the texts and images need to all be interchangeable. All the tested texts need to work when paired with all the different images because Facebook will mix and match the texts to find the best performing ads. More information about Dynamic ads can be found here.

If you want to test a specific text with an image, you will need to create single or carousel ads, dynamic creative ads only allow you to create mix and matchable ads.

Why can't you test different ads in dynamic creative ads?

This is because dynamic ads really only show 1 ad. Facebook combines the texts and images until it finds 1 version that is performing best, and then shows that version to your audience. If you want to have several ads running at once, you need to choose a different ad format (single or carousel ads).

So, in case you want to test different ads and you are using Dynamic you need to the following:

If you want to test more ads, do not duplicate you already are using, because this will cause Audience overlap.

The basics of audience optimization

When you create an audience (and the ads inside it) Facebook begins to show the ads to the audience you defined. Every time your ad is shown to potential customers, and there is an event, Facebook “learns” from the event. With time, Facebook discovers who to show your ad to, in order to get results, (who are more likely to click your ads) and which of your ads perform best (if you have dynamic creative ads or more than one option). This is why your ads often perform better after 2 weeks, once Facebook has gathered enough event data to be able to determine the best ads and audiences and "optimized" your delivery.

But if you create several audiences, Facebook is going to optimize the ads in each audience separately and waste money while it does so. Let's use the image below as an example. 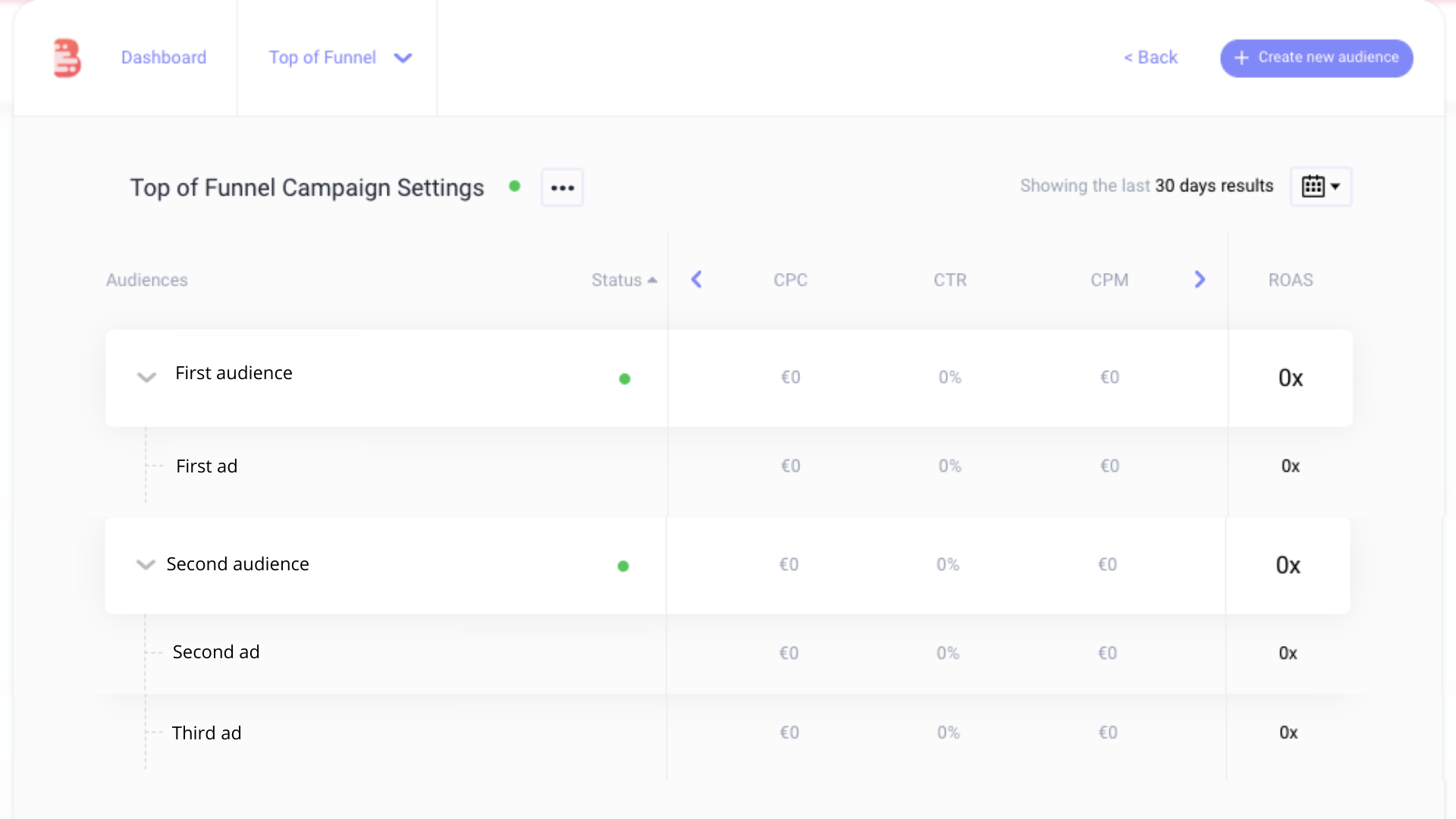 In the example, let's imagine a Brainitiy user created the audience "First Audience", and made a dynamic ad "First ad" to test out several creatives and texts and see what worked best. It will cost this user about $100 in order to get enough impressions and data for Facebook to optimize the ads ($100 is just an example figure).

Then the user decided they wanted to create a different ad, to see if a different image and text might work better, so they created "Second Audience", and built "Second ad" and "Third ad" as single ads.

The better option would be for the user to pause "First Audience", and choose the best performing ads from the dynamic creative ad, to create 1-by-1 in the new "Second Audience".

If you split your impressions between lots of different audiences, none of the audiences will gather enough data to be able to optimize. So you not only will waste money but you may not ever end up with an audience that has enough data to perform its best.

Did this answer your question?